Agustín walks down the streets in California. He is clearly sad, scared and tired. He has been escaping because he just wanted to reveal himself as what he is, but he has no money, no food and no family with him; yet, he represents the worst case of Homophobia in Mexico.

The teacher Agustín Estrada Negrete, holder of a PhD on Education, began as principal of “Centro de Atención Múltiple” (CAM) in Ecatepec, one of the poorest and most populated communities of the State of Mexico. He started with almost nothing and created a well organised education center for mentally challenged children. Besides that, looking at the poor conditions of the inhabitants, created workshops and gave resources and tools to the neighbors, so they could start their own business. He gave even from his own money to improve the conditions of the school and started a program to give education to elderly and parents. He was active and hardworking in the community helping every time he could.

By 2005 the Institutional Revolutionary Party (Partido Revolucionario Institucional, PRI), looking at the big influence of the professor in the community, asked him to support the Candidate for the Governance. Perhaps Agustín saw good proposals and a charismatic and young Candidate, so he accepted and helped him. The candidate for the PRI won.

In May 17th 2007, he was invited by the Human Rights Coordination to a rally at the International day against Homophobia. He went there on support and dressed up as in the movie “The Birdcage” making public his sexual preference.

Teachers under his charge were horrified at his opening and brought an action against him arguing that he had a wrong behavior and is a bad example for the community, but the community didn’t care about his preferences, they only saw a good professor and wanted him with them. The teacher replied with a complaint at the “National Council against Discrimination” but nothing was done.

He then goes to a meeting with the Governor of the State in the University of Ciudad Nezahualcóyotl exposing his case on the off chance that the Governor could review his case of injustice and help him, as he already knew the teacher and his reputation, besides he was helping him in his Campaign.

“If you already knew that we don’t like queers in our schools, why did you dressed up as a woman? I can not support queers”, was the response of the Governor.

In February 2008 the sub director of Education in the State, Ernesto Monroy, gave the teacher a one-year leave saying “we don’t want queers in education, I’m gonna kill you, so better get out of the educational system” threatening him with stronger legal actions to put him in jail.

By June of the same year, while in the office of the Sub-secretary of Government, he was again threatened and verbally abused but this time by the Director of Government, Gerardo Dorantes Mora, the Chief of the Department of the Government, Miguel Cruz Morales, and their personal. He moved to Los Angeles with his sister, but after a few days came back to Mexico to fight for his rights and his old position. 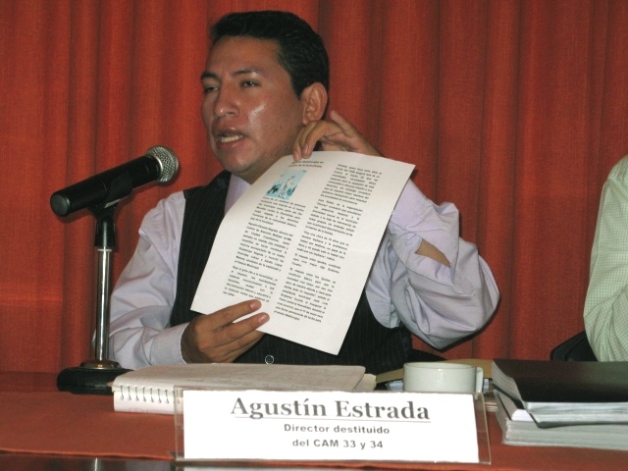 The students at CAM and their parents demanded his restitution in the school through several rallies and demonstrations but without any results due to the refusal of the education authorities to restore the professor. After the year of the forced license was passed, the teacher was still not allowed to come back to the school. In February 16th 2009 the protesters were brutally beaten up and arrested outside the school by the Police, including children with convulsions, that were stupidly considered by the Police as resisting the arrest.

On May 7th the teacher himself with his lawyer, Jaime López, appointed a meeting and tried to talk with the Governor of the State, in Toluca, the capitol city of the State of Mexico, supported by angry parents and activists, but when the meeting was supposed to happen they were not allowed to enter. As the press was also there following the story, the teacher was allowed to enter, but alone. He asked the presence of his lawyer with him, but then he realized that his lawyer was already taken into a police car and beaten. He ran towards the police car and so began the chaos.

“Our Governor doesn’t like faggots, gays and queers!” shouted repeatedly the Policemen to the people waiting in the cells. Some of them were released, but others like the teacher and his lawyer were charged with the crime of “Obstruction of Traffic”. Jaime López remained in jail that night and the officers were punching him almost all night. The witnesses became aggressors when around 10 custodians repeated the physical abuse. He was released the following day, after paying a $ 2 000 pesos fine.

Agustín Estrada had the same treatment but he was not released. He was relocated to the prison of Almoloya, among Drug dealers, kidnappers, killers and rapists. Federico, a custodian, receives him and rapes him repeatedly in a cell. After being raped he is moved with the inmates, they teared his clothes apart and dressed him in the blue uniform of the penal institution with the word “PUTO” (faggot) in the chest. He is then immediately exhibited in the prison’s yard, where he is publicly rapped again the following day. During the public rape he is told that they only follow orders of the Governor.

Days after, he is found guilty of the crimes of “Obstruction of Traffic”, which is considered a serious offense in the State of Mexico. Nevertheless, his family pays the $ 26 000 pesos fine and he is released.

He immediately tries to report the abuses he received, but no Institution accepts his accusations in the State. He then moves to the Federal District, where a Ministry of Justice takes his declaration supported by a medical report describing the damages in his body. The harassment continued and unknown men were watching him outside his house followed by patrols of the State Security Agency, asking the neighbors about him and telling them that “they’re gonna look after him and make him regret“.

In the following months he reports more accusations in the National Council for Human Rights and other Institutions. The UN even sends a request to the Government of the State of Mexico to take care of the safety of the teacher, but these petitions didn’t get much further. On the contrary, threats and harassment continued now daily and directly from the Institutions of Justice in the State, which in July 2009 released an apprehension order against the teacher, parents, students and even a 1 year old girl, arguing an illegal occupation of federal facilities (the school).

After all the mess, the Governor was asked about the case and in the most stupid way made a statement to the press that “the teacher was not took off of his charge because he is Homosexual, but because he dressed as a woman“.

On November 22nd Agustín came back from Toluca, where he had a meeting with officials of the Secretary of Education of the State. Almost arriving to his mother’s house, two unidentified men in police uniform came running to him and tried to stab him. As he quickly covered himself, they didn’t harmed him at the moment but he fell down and they started to kick him, until two pedestrians were walking by and the aggressors ran away. Agustín was carried to his mother’s and got medical attention. On the next day he tried to report the crime in the Public Ministry but they closed the door as they saw him approaching. The threatens started now against his family and supporters.

On the night of September 15th 2010, Mexico celebrated the 200 years of the beginning of the War of Independence, but there was no celebration for the teacher, who was raped again by three unknown men with a pipe while shouting “The Governor must be respected, as well as the Mayot!” They put a plastic bag in his head and tied his hands and feet up. Scared and in an enormous pain he fainted.

The teacher woke up in the emergency Red Cross services and the doctor calls the police to report the crime, but again, nobody wants to follow the accusation and nobody shows up in the hospital.

This time the professor fled to the US and without any access to the justice in the State of Mexico, only with persecution of the same authority, encouraged by the highest figures in the Government. He’s now waiting for a response for asylum in the US, where he can not yet be reunited with his family.

This case is one of many that most probably occur in Mexico, due to the ignorance and Homophobia that, like in this case, is also present in the Government of Mexico. But, why is it nowadays the worst case of Homophobia in Mexico? Because of the main characters involved, the “men” that, with all the power, never did anything about it, that even turned into persecutors, instigators and, most probably, authors of these crimes against a Homosexual: the then Governor Enrique Peña Nieto and the Mayor of Ecatepec Eruviel Ávila Villegas.

And this turns totally disgusting because of the recent situation of both. Eruviel Ávila is now the actual Governor of the State of Mexico, while Enrique Peña Nieto is currently the President of Mexico.

Yes! Disgusting as that!

He is the Head of State of the Mexican nation, carrying a flag of reunification, renewal, acceptation, peace and tolerance; while he kisses the hand of the Pope and orders to rape teachers.

This has become a complete theatrical scenario, where the Mexicans still consider him a real Candidate for the Presidency, even with his obvious lack of culture, his hollow personality, his immaturity in relevant cases to the Nation and his total ignorance in important matters to the Mexican society.

This is the worst case of Homophobia because it is an obvious series of crimes against a teacher that were guided by cold and unprincipled persons, the same persons that try now to rule in Mexico, and even though Millions of Mexicans still support him everywhere.

Isn’t this the worst case? So obvious, so clear, so dangerous and mortal, but also so wrong! It is the worst for Mexico. We Mexicans see it and do nothing about it, we see how a bully uses his power and influences to destroy and eliminate whatever thinks is different for him, and we allow it, we saw it happening, and nothing was done, even worst, the disgusting authors were promoted. Indeed, so wrong, indeed the worst case of Homophobia in Mexico. So down has fallen the Mexican country because of the lack of information, or in better words the constant attempts to hide all this kind of crap and dishonest behavior of this influential puppet. Should my beloved country fall deeper into shit?

. The lack of information and ignorance won in my beautiful country.

For more information in this case you can read the storyline in the blog of the teacher, who unfortunately stopped writing in 2009 before he escaped from Mexico, so we don’t know his actual status.

A more detailed description of his case can be found in the website of the Ombudsgay, but in Spanish only.

Version with subtitles in English (but static images):

1 thought on “The worst case of Homophobia in Mexico”